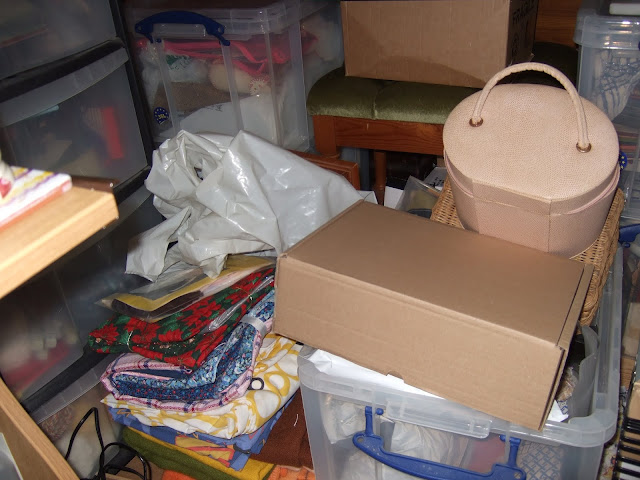 It has been a long time coming  Long overdue, I am selling/disposing much of what I have built up over the last 30+ years. I am not the same person that I was when I first started 'collecting' craft materials.

I feel quite sick at the hours wasted on buying and hoarding all this stuff.  I no longer identify as a crafter.  Although I want to be shot of reminders of my past self, it is a wrench to let go products that were a buffer between me and my depression.  With hindsight, buying stuff made me feel better and I justified buying craft materials with the excuse that I could use them to make things to bring in an income.  What I should have been doing was working on my self image and investing in looking after my own mental and physical health.

I don't know who reads this blog anymore (apart from a handful of cherished regular readers) but I want to warn them about the craft habit.  If you talk to crafters a lot of them buy craft products and hoard them without actually ever using them.  They convert spare rooms into craft rooms and sheds into craft dens.  If you are young or have recently discovered craft don't be drawn into believing you need to have everything.  I truly believe my craft habit was an addiction.  We often hear about drug addicts and alcoholics but not so often about other forms of addiction.  Yes, excess drugs and alcohol is a form of self harm and can lead to death but I would suggest that any form of addiction is harmful to the addict and to those close to them.

This blog has been mainly about craft over the years but weirdly a lot of people that read it aren't particularly into craft!  I guess it is like people that watch cooking shows but don't actually do any cooking themselves!

I don't know which direction to take this blog into now if at all.  What on earth can I talk about?  Any ideas?

Comments are moderated on this blog so it may be a while before your comment appears. I will try to leave a response to your comment where possible. Thank you so much for reading!

Nice to Meet You!

Welcome to Linden Grove. Please do not use my writing, images or designs without my permission. Thank you.

Some Lovely Blogs and Websites

Best English Language Novels of 20th Century That I Have Read

Under the Greenwood Tree - Thomas Hardy

The Language of Flowers - Vanessa Diffenbaugh

1. .Combine a number of things into a single more effective or coherent whole.

1. Move forward in a purposeful way. 2. Make or cause to make progress.

The state of being calm, peaceful, untroubled.

To persist in or remain constant to a purpose, idea, or task in the face of obstacles or discouragement.

To evolve from one's own thought and imagination as a work of art.